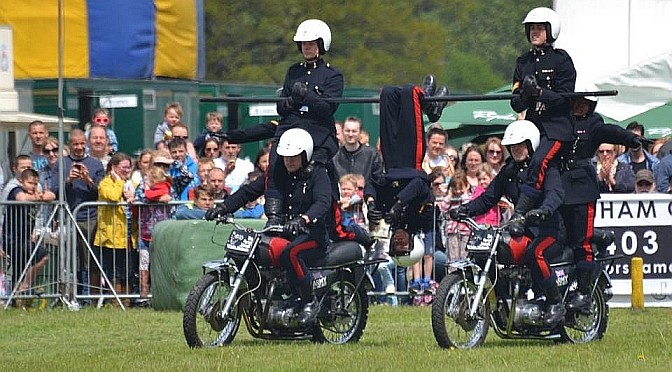 It`s just before 8am a hive of activity on the Blue Anchor Showground on the A22 Blindley Heath Nr Lingfield Surrey as stall holders arrive and set up their stands, and Animals are led to pens and groomed making them look smart for presentation and judging later in the morning.

The Susy outside broadcast unit is in position at the head of the main arena courtesy of the Outdoor Sound Company who provide the sound for both arenas at Cowpie.
The Kettle is on when Izzie arrives in time for a mug of coffee, Neil has stayed on site all night soaking up the country atmosphere meeting people and conducting interviews and transmission tests.

A phone call to the main studio in Merstham, and Engineer Jude Reynolds is standing by ready to hand to the Breky Team at the showground – the news finishes and Neil and Izzie welcome you to the Cowpie show with an edit of “Morning” from Peer Gynt suite, and some rather odd sound effects! The show is off, and no end of pre-recorded interviews and live interviews plus Izzie the “Xtreme” presenter of Susy (alledgedly!), screams her way across the main arena on two wheels of a quad bike driven by a rider from the Royal Signals White Helmets!!
Neil and Izzie talk about Dogs, birds of prey and the miss world of the sheep world – Aka Susie the sheep! Baaame if you ask me!

Two hours of live breky show flew by, no more coffee but a taste of sweet cider given to the presentation team all the way from Somerset brings the breky show back to the countryside and a round up by Colin Smith, the event commentator of everything young farmers like best!

Enjoy the edited highlights a montage of interviews and screams!

A Huge thank you to all the young farmers, Stewart Watson Cowpie Chair, Neil Fuller Cowpie Liason
The exhibitors and display events that spoke to us in particular Fiery Jack for recording “Good Morning Cowpie Show”
The military personnel of the Royal Signals White Helmets who were extremely good sports!
And everyone who came along as a result of listening to Susy Radio and those who came to say hello!
Neil Munday

The list of places where face coverings must be worn has expanded.