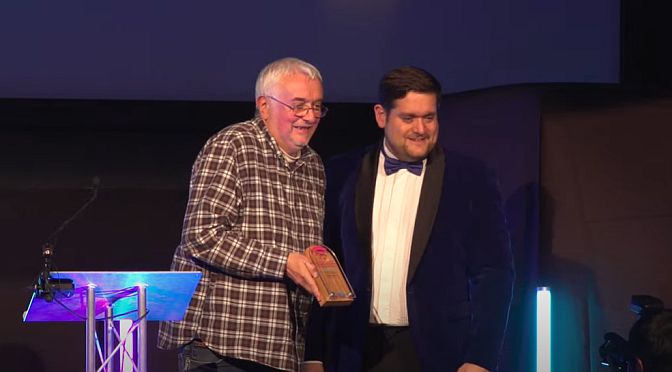 The Community Radio Awards recognise all the great work that Community Radio does in their local communities, entertaining, informing, and engaging listeners. All this hard work is being done by minimal staff and more often than not, lots of volunteers.

It’s run by a team of volunteers with experience of radio in all forms and sectors from Student, Community to the BBC and Commercial.

Martin Steers, Awards Chair, said: “It’s been another great year for Community Radio across the UK, and as ever it’s been a big challenge for our judges from across the industry as the quality of entries are better than ever, a real testament to all that Community Radio stations do in their areas.”

This year, the award ceremony was held at King’s House, Bedford on the 19 November.

We are delighted to announce that Susy Radio’s Geoff Rogers has this year received an Honours Award for Outstanding Contribution to Community Radio ‘in recognition of outstanding or exceptional service’ and made a ‘significant impact to the community radio sector’.

All the volunteers associated with Susy Radio extend their huge congratulations to Geoff for a much deserved award.

Geoff ‘s interest in radio started from the age of 12 when he created his own ‘radio station’ at home for the benefit of the family.

In the 1980s Geoff volunteered at Radio Redhill (hospital radio), at the original Redhill General Hospital where they had a caravan in the car-park. Geoff visited the wards collecting requests and meeting patients, helping out at events, fundraisers and outside broadcasts, presenting shows and Saturday sports shows.
Geoff continued with Radio Redhill after their move to their new base at East Surrey Hospital.

Geoff is one of a small team who set up many RSLs to promote local charities, causes and events; the team went on to form Susy Radio as follows:

In 1996 Geoff was involved with Susy Radio’s RSLs as a presenter; nearly every year since 1996 Susy Radio had run one or two RSLs (month long restricted service licence) per year on FM or 531 kHz AM. These promoted local charities, causes and events and campaigned for local community radio.

In June 2010 Ofcom awarded Susy Radio Ltd a five year licence.
Geoff has been Programme Director of Susy Radio from 2011 to the present day.

On 15th July 2012, Susy Radio launched on FM as a fully licensed community radio station. Geoff was part of the team which launched Susy Radio and has remained a presenter and Director ever since.

In December 2016, Geoff applied for Susy Radio’s licence to be extended and this was granted for another five years until 2022.

In June 2022, Geoff informed the Susy Radio volunteers that the licence renewal that he applied for had been extended for a further five years.

Geoff has recently updated the Susy Radio playout system using his knowledge in IT to upgrade the infrastructure and to train the presenters on the updated system. Geoff has helped train them with training videos and held Zoom training sessions during a time when the pandemic restrictions made face to face training difficult.

Geoff is also the Programme Director at Susy which also includes continual maintenance of the presenter rota. This has been increasingly challenging over the last 2 years of the pandemic as he has been instrumental in devising a Covid-safe schedule for the presenters.

Additionally, Geoff also monitors the station’s finances, contributes to the sales negotiations, advertising and arranges the on air adverts.

In addition to his principal role at Susy radio, Geoff is a technical support specialist for a new online radio project, ‘121 Radio’ and also at ‘Aspen Waite Radio’, another online radio project.
Geoff is also a presenter on Tolworth based ‘Radio Jackie’ broadcasting to South West London which he has been associated with for many years.