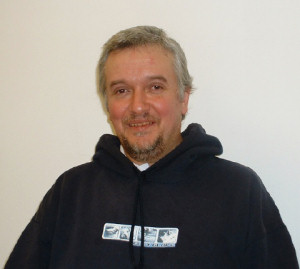 I’m Geoff Rogers, Programme Director and presenter. I’ve been involved in radio in one form or another since the age of 12. My first serious involvement in radio was in the fields of South London with rock station South East Sound in the 1980s, followed by a stint on Radio Jackie when it was still a pirate.  Then followed, hospital radio, radio work overseas, internet radio, RSLs with Susy and other stations.  I am responsible essentially for everything that is broadcast on Susy, the music, the programmes, the presenters, the news, the advertising and the station profile.  I also present the drivetime show when needed (currently Mondays and Tuesdays), and other shows as needed,  As a former IT professional, I also look after the PC hardware, website, and pretty much anything that’s thrown at me.  My ambition for Susy is to give our area the local radio that is has sadly been denied in the last few years and provide a professional, yet accessible radio service.