Apart from presenting, he does the occasional TV extra work backing up those that say he has “a great face for radio”. 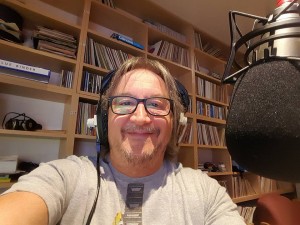 He loves most genres of music but his main interest is rock which began on his way back from school one day when he found a Traffic album that had been run over by a bus. Since that moment, he has spent many hours at gigs and festivals in the UK as well as the States seeing most of the major bands along the way.

He also enjoys volunteering for “Attitude Is Everything” during the summer, assisting disabled campers at several major festivals.

Del sees rock as a generic term for many kinds of music in the way that “pop” covers a lot so you should always expect something new and a bit different popping up in his show.

That is why his show is called “Rock Spectrum”. You can hear it Sundays from 7 to 9pm