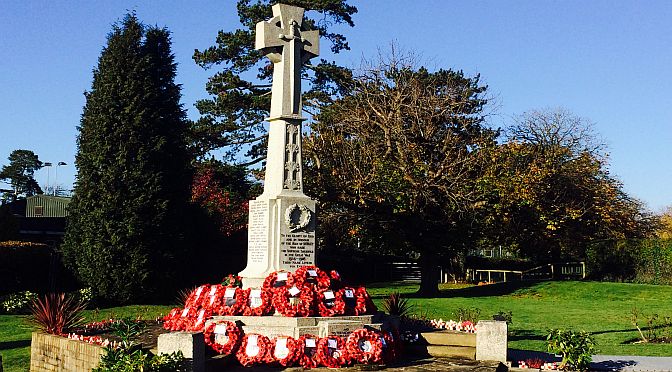 The Unknown Warrior is buried in Westminster Abbey as a memorial to the dead of World War One, particularly those who have no known grave.

In 1920, as part of ceremonies in Britain to commemorate the dead of World War One, there was a proposal that the body of an unknown soldier, sailor or airman lying in an unmarked grave abroad be returned to England for burial in Westminster Abbey. This was to symbolise all those who had died for their country, but whose place of death was not known, or whose body remained unidentified.

It is thought that the idea came from the reverend David Railton, who had served as a chaplain on the Western Front. There are a number of versions of how the selection of the Unknown Warrior was made, but it is generally agreed that between four and six bodies were exhumed from each of the main British battle areas on the Western Front on the night of 7 November 1920, and brought to the chapel at St Pol, in northern France. Each was covered with a Union Jack. The commander of British troops in France and Flanders, Brigadier General LJ Wyatt, picked one. This was placed in a coffin which was taken to Boulogne, where it was transported to Dover on HMS Verdun. The other bodies were reburied.

On the morning of 11 November 1920 – the second anniversary of the armistice that ended World War One – the body of the Unknown Warrior was drawn in a procession to the Cenotaph. This new war memorial on Whitehall, designed by Edwin Lutyens, was then unveiled by George V. At 11 o’clock there was a two-minute silence, and the body was then taken to Westminster Abbey where it was buried at the west end of the nave. To the surprise of the organisers, in the week after the burial an estimated 1,250,000 people visited the abbey, and the site is now one of the most visited war graves in the world. The text inscribed on the tomb is taken from the bible (2 Chronicles 24:16): ‘They buried him among the kings, because he had done good toward God and toward his house’.

Article reproduced by courtesy of the BBC 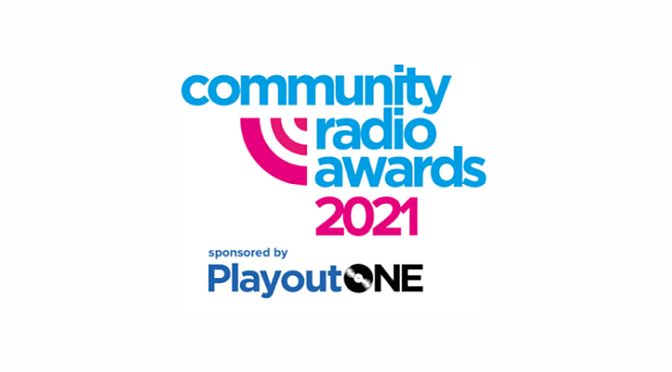 The Community Radio Awards have been setup to celebrate community radio and all the hard work and time that the volunteers involved in community radio put into their stations, shows and communities.

It’s being run by a team of volunteers with experience of radio in all forms and sectors from Student, Community to the BBC and Commercial.

Last year, the award ceremony was held only online, but this year was held in Coventry on the 23rd October at the Coventry Transport Museum.

Susy has received one award previously which was last year, winning Bronze for ‘Outside Broadcast/Live Event’ of the year. This year, five submissions were made by Susy for different categories resulting in one shortlisted entry. 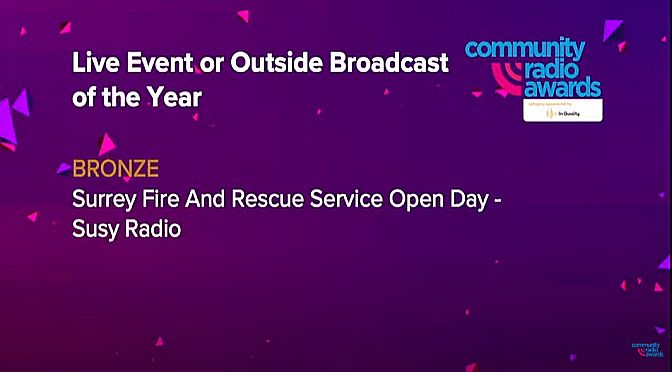 This has been whittled down from more than 430 entries from stations from every corner of the UK.

The station had picked up a nomination in the name of Geoff Rogers in the ‘Volunteer of the Year’ category for his work in helping establish community radio for the East Surrey and North Sussex community beginning in 1994, and his continued active involvement in the service ever since.

The winners were revealed in a ceremony at the Coventry Transport Museum, in partnership with Coventry UK City of Culture.

Alan French, Station Chairman, said: “We are delighted to have been recognised among a large number of other stations doing great work across the UK.”

Martin Steers, awards chair, said: “As face to face events resumes, it’s great to get together and celebrate the hard work of the last 18 months. Many stations have further cemented their essential community role in this time, and it is great to reflect.”

“It is clear to see from this, that passionate presenters, volunteers, and staff are really there for their audiences.”

Geoff Rogers was part of the team which launched Susy Radio on FM on 15th July 2012 as a fully licensed community radio station. He has remained a presenter and Director ever since.

For the wider East Surrey and North Sussex community, his work contributed to providing a radio service for the local area where there had previously been a gap. He was not only a key player in the initial set up but has maintained the service overseeing the licence renewal.

Geoff has recently updated the Susy Radio playout system using his knowledge in IT to upgrade the PCs in both studios and to train the presenters on the updated system. Some were unsure of change but Geoff has helped train them with training videos and held Zoom training sessions during a time when the pandemic restrictions made face to face training difficult.

Geoff is the Programme Director at Susy which also includes continual maintenance of the presenter rota. This has been increasingly challenging over the last 18 months as he has been instrumental in devising a Covid-safe schedule for the presenters.
He has enabled many presenters to broadcast from home in order to comply with social distancing requirements and continue to maintain a ‘live’ programming sevice. He has spent many hours supporting presenters and talking them through the process of setting themselves up to broadcast remotely. 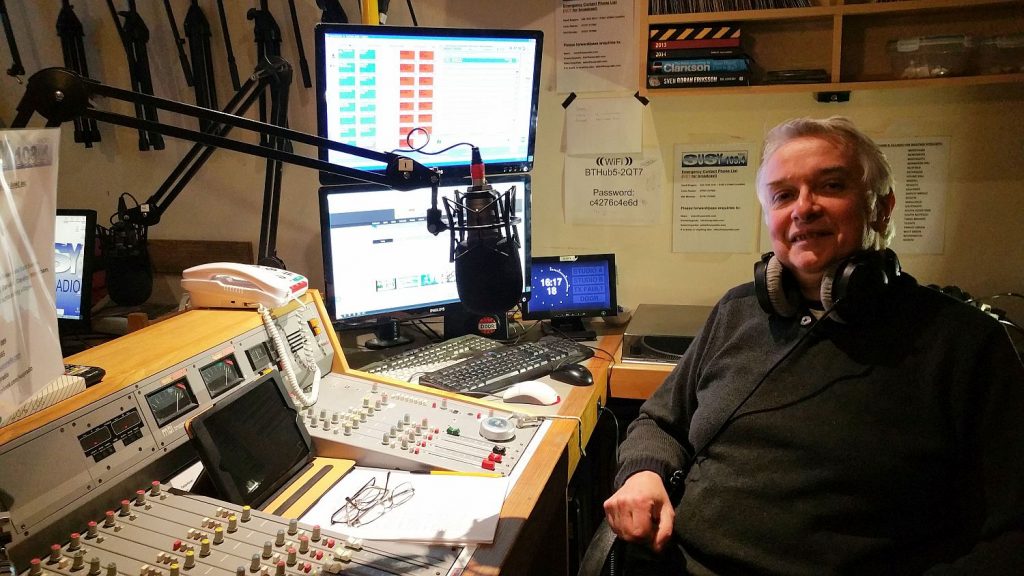 Geoff also looks after the station’s finances, does a lot of the sales negotiations and advertising and arranges the on air adverts.
Although now a delegated task, Geoff also used to spend many hours over many years training new presenters and the news team until they were ready to present unaided. His foundation has enabled others to take on the training using Geoff’s standards.

Although there is now a website manager at Susy Radio, Geoff has previously set up and maintained the station’s website. Geoff’s IT background also means he maintains the PCs and the IT side for Susy.

Assisted by his deputies, Geoff programmes the music to create the station sound for regular programmes and adjusts the programming according to current news events. This became evident following the death of the Duke of Edinburgh.

Finally, Geoff has also been known to present the occasional programme!

Some words from his colleagues:

“……Geoff Rogers goes beyond that giving more than 100% of his time, energy and belief without necessarily thinking of reward or recognition.
Outside of Susy Radio, Geoff has a busy life but has always been someone who cares about the people who operate on the station and will give up his time to help and assist any of them who need encouragement, help or support.” Alan French, Chairman Susy Radio

“Geoff is always just a phone call away and that is a wonderful safety net that I value as a presenter. Thanks Geoff.” Shan Robins, Volunteer Presenter

“I am in no doubt the role he plays is often a thankless one. Impeding on his life in so many ways. Geoff loves radio, and it shows. He is the one person bringing all the volunteers together and ensuring that for Sussex and Surrey Community radio lives on.” Si Clarke, Volunteer Presenter 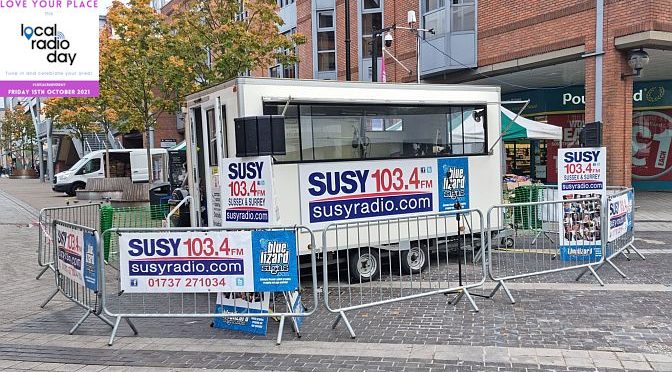 ‘LOCAL RADIO DAY’ is an annual event in which local radio stations across the country come together to highlight the value of local radio to communities and to celebrate the unique relationship between local broadcasting and listeners.

With the ongoing challenges of the coronavirus pandemic throughout the year, with local news, traffic bulletins and information on local events and details of various support hubs and clinics for coronavirus, local radio has been crucial for many in their local communities during 2021, and Susy Radio has endeavoured to play its part for our community.

This year, the event took place on Friday 15th October and Susy Radio joined over 200 other local radio stations in celebrating the theme, ‘Love Your Place’.

As part of the celebration, Susy Radio’s Outside Broadcast Unit masterminded by Neil Munday and ably assisted by Jim Richman, Pat French and Shan Robins spent the day based in Redhill Town Centre with a live programme being broadcast between 12pm-3pm featuring interviews and chats with various shoppers, passers-by, market stall holders and other dignitaries.

BBC Radio Sussex and BBC Radio Surrey also took part in the day’s celebrations, and invited Susy Radio to take part in a live on-air quiz against two other local radio stations which were Wey Valley Radio which broadcasts to the community of Alton and surrounding area of North East Hampshire, and V2 Radio based in Chichester and serving West Sussex. Susy’s team were Geoff Rogers, Neil Munday and Tracey Franklin.

Susy Radio’s Shan Robins was present at the Outside Broadcast Unit, and spoke with some passers-by about what they loved about ‘their place’.

Deano is in Redhill and loves Crawley Town FC. He says, ‘Come On the Reds’ for their game due on Saturday, 16th October!

Two year old Jude loves dancing and was dancing to the Susy Radio songs playing out in Redhill town centre! Michelle, Pat, Linda and brother are in Redhill and love the shopping Steve is driving buses in Redhill and likes it more than London because the people are more laid back and the ‘Greggs’ is tastier here! Pat is in Redhill and told Shan that he likes the accessibility of the town from where he lives, and the renewal prospect for a new multi screen cinema. Eve, Mariella, Eve and Mimi who’ve bumped into each other by chance in Redhill after 10 years all like Reigate Heath. Sajad is from India working on a contract in Redhill and says everything is very accessible like shopping, banks and the park with a village, yet urban vibe and not too busy. Ben lives in Redhill and enjoys walking on the downs. Carol and Mel have lived in Redhill most of their lives and told Shan that they love the Memorial Park because it’s a lovely space. Robert is in Redhill and told Shan that when the sun catches the tops of some of the buildings with verdigris, that they look lovely. Jan Thomas is in Redhill with our Outside Broadcast Unit and says the Belfry Shopping Centre is great and celebrating its 30 years. He loves The Harlequin Theatre. 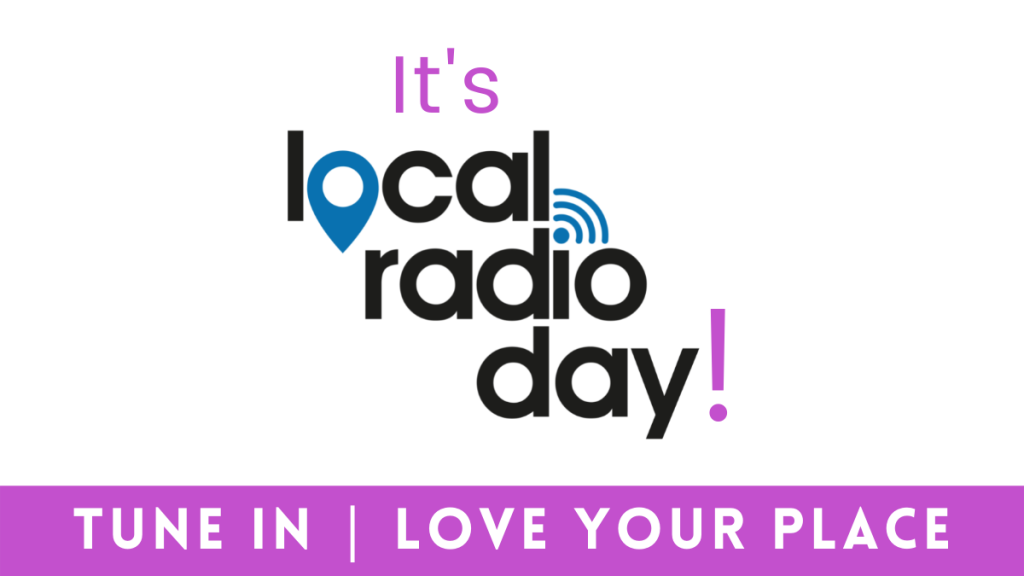 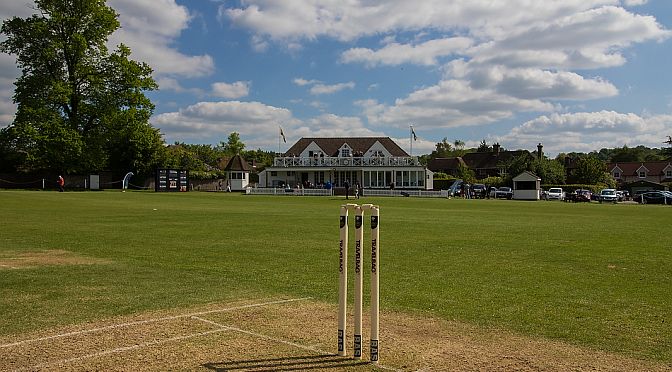 Horley miss out on promotion and South Nutfield finish 2nd in the Surrey Downs League.

To include your club’s news, results and reports, please email your information to [email protected] 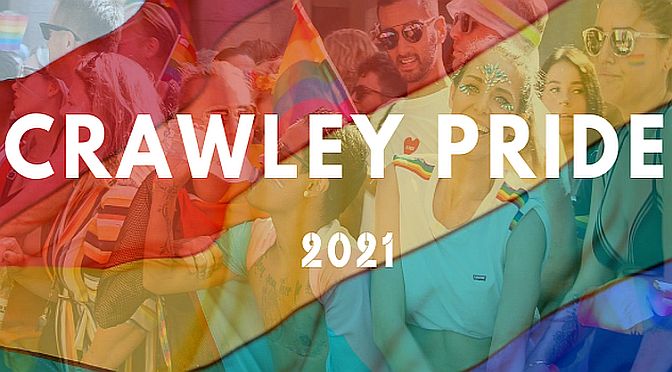 Susy Radio was delighted to be invited to attend Crawley’s first ever Pride event held over the Bank Holiday weekend of 28th and 29th August, and broadcast a special programme LIVE on each of the two days from Goffs Park in Crawley.

‘Crawley LGBTQU+‘ is an organisation providing educational and advisory services, raising awareness of the issues facing the LGBTQU+ community and promoting Crawley as a safe place for members of the community.

Join host Neil Munday, supported by Clive Hilton and Jim Richman and re-live our programmes from each of the two days here in their entirety. 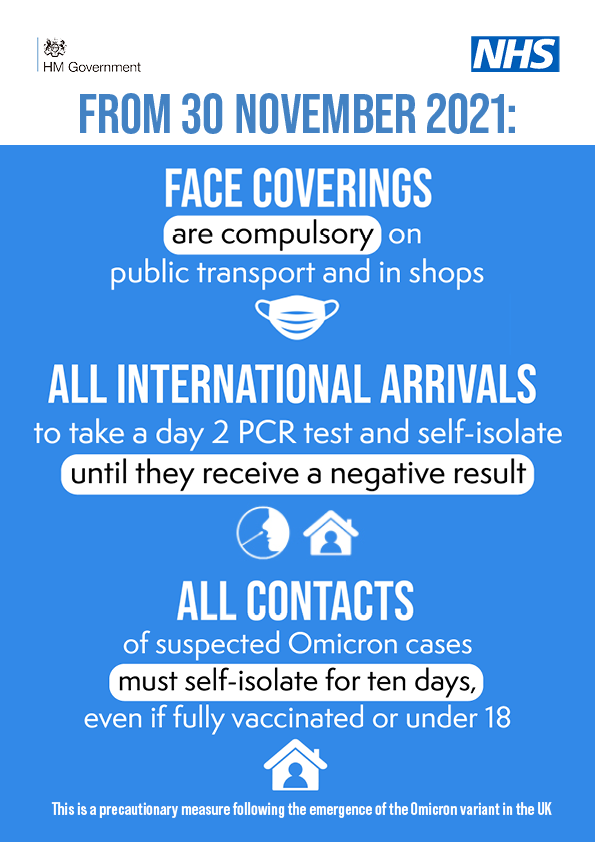 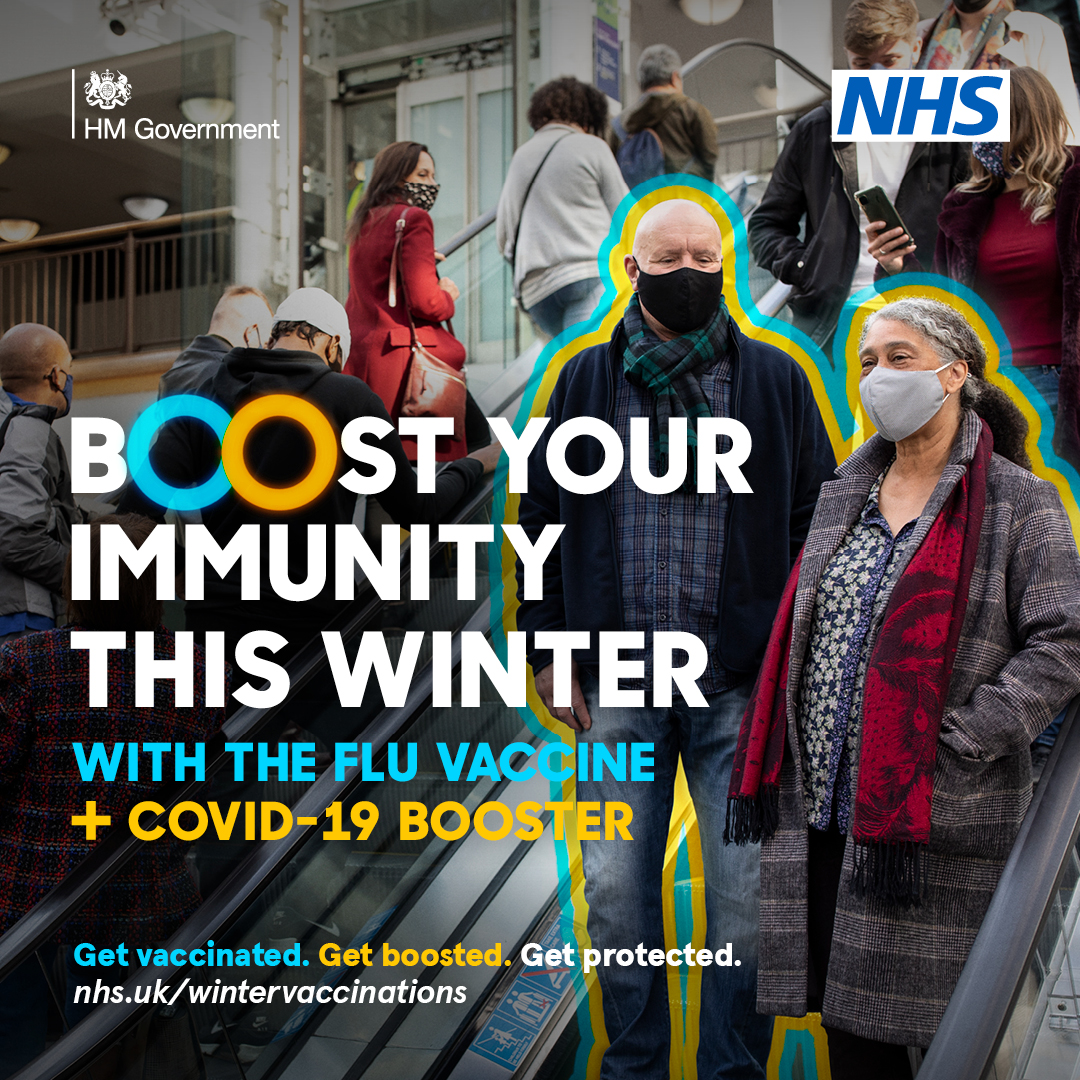