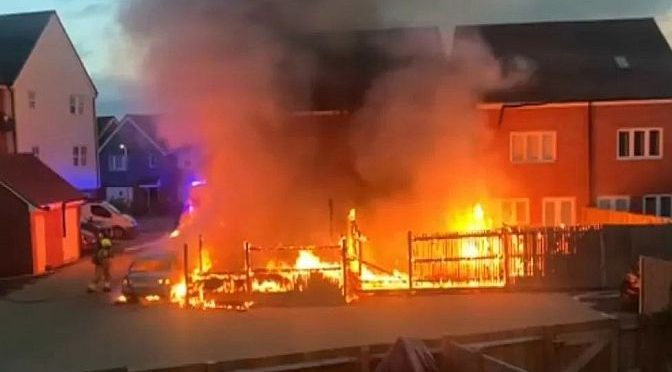 A newlywed couple had to rush back from their honeymoon after their home was badly damaged by fire.

Laura Ellis and her husband were in the Lake District when they were called about the blaze at their house in Horley, Surrey.

Mrs Ellis said it was “heartbreaking” to see how much damage had been caused by the fire, which started in a car.

An 18-year-old man has been charged with arson with recklessness to endanger life.

The alarm was raised by their next door neighbours, who were woken by smoke in their bedroom.

“To wake up at four in the morning to this news was just heartbreaking,” said Mrs Ellis.

“We literally had an hour of married life to soak in our magical perfect day, and then our life is just upturned and it’s awful, it’s terrible. This will affect us for a long, long time.”

The fire destroyed the garden, cracked windows and buckled their frames, and destroyed the boiler and its flue, along with the property’s electrics and water pipes.

Fire fighters had to break down the front door to stop the fire spreading further inside.

The couple’s wedding had already been postponed twice because of the pandemic.

They had spent thousands of pounds designing their garden.

Their friend and neighbour Josh Goldswain said he did what he could to clear away debris before they returned.

Mr Goldswain said: “With them being such good friends to us, and coming back and seeing this, my initial thought was to try and clear as much as I could so they didn’t come back and see the remains of the beautiful garden that they had.”

The man who has been charged with arson will appear in court later this month.