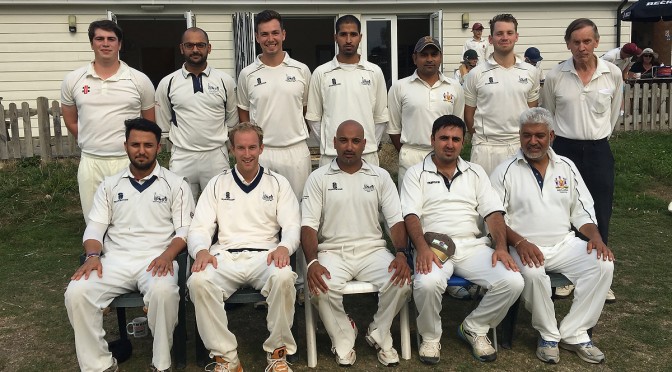 Abass picks up player of the year as Merstham win third title in a row.

First team captain Nav Saeed said at Merstham’s players awards night on Saturday that he thought the club’s historic rise to the Surrey Championship could be just the beginning of more success.

Merstham’s first team were confirmed as Fuller’s Brewery League Premier Division Champions that day, after their game with Old Tenisonians was abandoned in the second innings, as was the game between Merrow and SinjunGrammarians. That meant Merstham stayed above Merrow, who were the only team who could have beaten them to the title.

Both teams were promoted to the Surrey Championship, with Saeed delighted to have claimed a third successive league title after winning the second and then first division titles in 2014 and 2015 respectively.

“In our 152 year history, we’ve never played in the Surrey Championship at first team level and now we’ve got the opportunity, so I’d like to say a big ‘thank you’ to the first team.

“There’s a lot more to come from this club. We have a young side and it’s a great club to play for. I want to continue this success for years to come.”

Merstham only lost a handful of games all season, but only went to the top of the division after victory in the penultimate game.

Saeed praised this season’s new recruits, including Sunny Bowry, Assad Naeem and Damian Barnett, who had “fitted in perfectly”. He also hailed opening batsmen Arsalan Abass and Joe Shinners and two players who had been recruited via the third team, Ben Baker and Lauire Nicholson.

“I’m very proud to have them in the first team,” said Saeed.

He added that every player had played their part, including 38-wicket pace bowler Sulliman Younis who had put “fear” into opponents with his pace and aggression.

He reserved special praise for his choice as first team player of the year – Abass – a player whom Saeed said he had watched “grow” as a cricketer during Abass’s six years in the team.