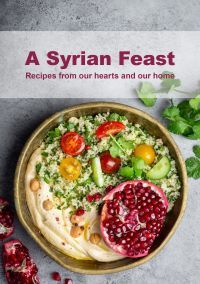 A new cookbook has been published which celebrates the heritage and best-loved dishes from East Surrey’s Syrian community.

A Syrian Feast, which is published by Reigate and Banstead Borough Council, features recipes shared by 20 Syrian families who are settled in the area. It includes favourites such as Baba Ganouj and Baklava.

The families have settled in the area as part of the Government’s 2015 Global Resettlement Scheme.

Caroline Neame, Reigate and Banstead’s Executive Member for Housing and Support, said: “Through this scheme and the incredible support from dedicated volunteers, the Syrian families have been helped to develop independence and resilience to ensure they are able to contribute to, and thrive in, their new communities.

“A Syrian Feast is a reflection of the long-lasting trust and friendship brought about by those involved in the scheme. The sharing of food and recipes with family and friends is something we can all relate to, and I thank all the families for their generosity in sharing their delicious recipes and special memories of their lives in Syria to create this unique book.”

Seham is originally from Aleppo, in north-western Syria. She resettled in the borough with support from the scheme and local volunteers. She explained: “We were amongst the first families who arrived in Redhill five years ago under the resettlement scheme for Syrian refugees. We have been so lucky to have benefitted so much from all the support that the resettlement team and volunteers provide us. We are happy and feel very much part of the community.”

She added: “Whilst learning English and working here in the UK, I often cook food for colleagues. Everyone really appreciates the effort and loves my food.”